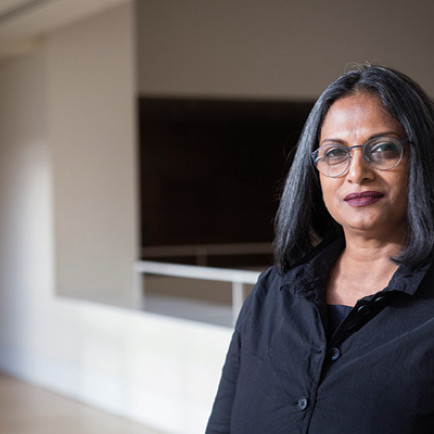 Early Life & Education:
Tabassum was born in Dhaka, Bangladesh, the daughter of an oncologist. Her family migrated to Dhaka, Bangladesh from India during the partition of Bengal in 1947. She attended Holy Cross Girls School and College. Tabassum graduated in architecture from Bangladesh University of Engineering and Technology in 1994.

Career:
In 1995 Tabassum founded URBANA, an architecture practice based in Dhaka, Bangladesh with Kashef Chowdhury. The firm designed a number of projects for about ten years.In 2005 Tabassum established her own practice, Marina Tabassum Architects, and she serves as its principal architect.

Since 2005 Tabassum has been a visiting professor at the BRAC University, where she has also taught courses on Contemporary South Asian Architecture. She also conducts undergraduate studios at the University of Asia Pacific, and has given lectures and presentations at a number of other educational institutions and conferences. She has been the Director of Academic Program at Bengal Institute for Architecture, Landscapes and Settlements since 2015.Tabassum was the designer of Bait Ur Rouf Mosque in Dhaka, which was completed in 2012. In 2016 the project was shortlisted for the Aga Khan Award.