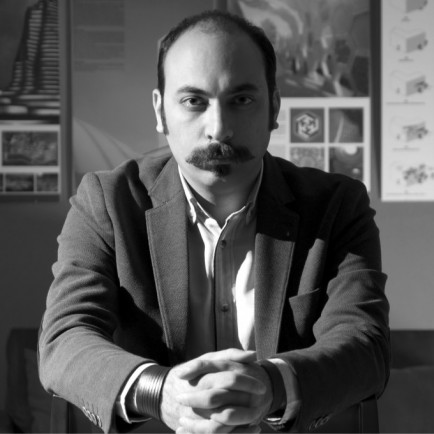 Arash G Tehrani, is a young Iranian Architect, Designer and University lecturer, whose projects were recognized and published worldwide and translated into different languages. Beside international attention in architectural magazines, books, and websites; he’s been selected in ARCHITECT Magazine’s list of “50 most Influential Architects from the Middle East” for 2 years, and “The Architect of the Season” by ArchLine Magazine. He is a 7-time nominee of Middle East Architect Awards since 2014 for several categories, such as “YOUNG ARCHITECT of the YEAR”; Shortlisted for “Asia Architecture Awards 2016” in Vienna, shortlisted in 16th and 21st World Architecture Awards and the semi-finalist in Grand Me’mar Awards. His works also were exhibited in 56th Venice Art Biennale 2015, in Iran pavilion, and several other exhibitions around the world. In addition to working on personal projects since 2008, and participating in competitions, he has designed a different variety of projects in size and type for several architectural firms as the design architect.

His practice of architecture includes many types of projects, ranging from small monumental projects to Cultural, Sports Complexes, Residential complexes and also Concept projects. He is also experienced in music, abstract painting, and Photography, as a result of which he has achieved some architecture photography awards and honors.

From 2013, he has worked as a Lecturer at Islamic Azad University & EYC. Also, as an Architect, he is working on a design process research which is called “Attribute-oriented Architecture”, which was examined on some of his professional projects, however, it should be mentioned that it’s an ultra-Architecture philosophical point of view.