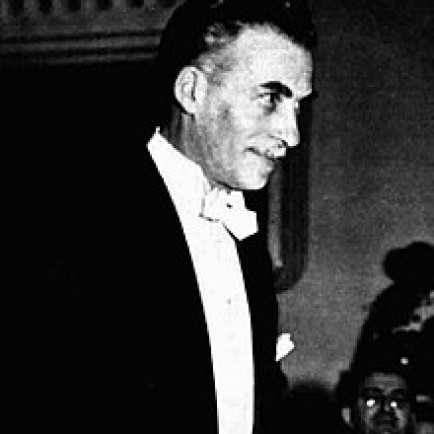 Mario Rossi (29 March 1902, Bitetto– 29 June 1992, Rome) was an Italian conductor, noted for his solid and meticulous readings of a repertory ranging from Italian classics to Russian moderns such as Prokofiev, to the German operatic classicist Christoph Willibald Gluck.

He studied composition in Rome with Respighi and conducting with Giacomo Setaccioli, graduating in 1925, and soon after graduation he took up the post of assistant conductor to Bernardino Molinari.

Appointed resident conductor of the Maggio Musicale Fiorentino in Florence (1937–46), he made his debut on the podium there in 1937 with Mascagni's Iris. The following year he led the premiere of Gian Francesco Malipiero's opera Antonio e Cleopatra.

He conducted in all the major opera houses of Italy. As well as establishing himself in the standard Italian repertory, he took part in many revivals of ancient works such as Galuppi's Il filosofo di campagna, Monteverdi's Il ritorno d'Ulisse in Patria, and Piccinni's La buona figliuola.

His recordings of Gluck's Paride ed Elena (1968) and of Prokofiev's Alexander Nevsky (1954) display Rossi as an unquestionably great conductor whose styles in a 1770 German masterpiece as well as in a 20th-Century Russian masterpiece are remarkable for avoiding any distinctively "Italianate" or otherwise inauthentic stylistic tendencies. In other words, the range of Rossi's musical sympathies was extraordinary.

He was certainly one of the least-known of the great orchestral conductors of the 20th Century, one of the very few conductors who sounded authentically Gluckian when performing Gluck, just as much as he sounded authentically Verdian when performing Verdi. Achieving excellence across such a disparate repertory is rare even for great conductors, most of whom are stylistically authentic only in the music of a few periods, or a few nationalities (usually their own). For sheer universality, Rossi had few if any equals.