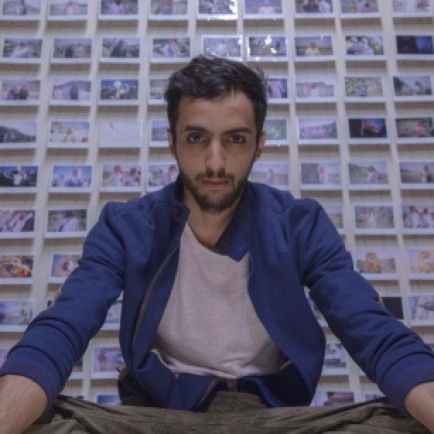 Born in the southern city of Khamis Mushayt in Saudi Arabia, Ajlan is now based in Riyadh as a math teacher at Al Sahabah Public School.

He is a co-founder of Gharem Studio along with established artist and brother, Abdulnasser Gharem. an internationally known artist who served as his mentor in the absence of art schools. Together they run the innovative, Riyadh-based Studio Gharem.

In 2011 he was selected by the Crossway Foundation in London to meet with museum curators and artists and collaborate with the British Museum, Tate Modern and Penguin Books.

Ajlan Gharem is a multidisciplinary artist who explores how Saudis articulate their culture amidst globalization and the shift in power dynamics over time and across generations.

Subject to the rapid development in the Gulf, and the precautions Saudi leaders have taken in its response, Ajlan illuminates the evolution of power from the state to the individual and his younger generation’s ability to incite change.

He complements efficiency in producing his installations with the fluid concepts of innovation and design.

The artist received an undergraduate degree in Mathematics at King Khalid University (graduation date) and has applied his analytical background to art making.