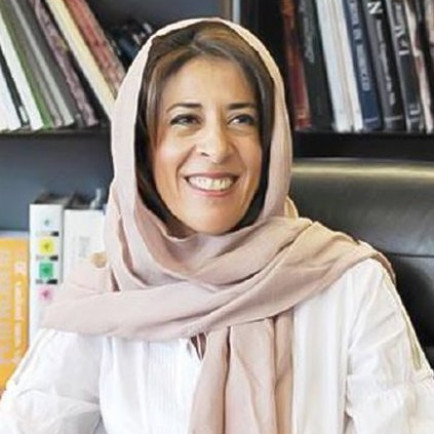 A Saudi National, was appointed Director General of the Institut du Monde Arabe in Paris (Arab World Institute) from March 2011- March 2014. A cultural organization founded by the French government and the 22 countries of the Arab League, the Institut’s mission is to disseminate knowledge about the Arab World, its civilization, culture and language and promote cultural exchanges between France and the Arab World.

From 1987 till her appointment as Director General she headed the Department of Contemporary Art and Photography in the museum of the Institut du Monde Arabe. During that period, she focused on modern and contemporary art from the Middle East.

For the past 30 years she has curated numerous successful and wellreceived exhibitions. Discovering an emerging and unexplored Arab art scene during her job as a curator and head of the contemporary art department at the IMA in Paris, she started promoting the vibrant young Arab artists, and helped them enrich their visual heritage by putting them into contact with their Western peers.

Because of her extensive knowledge, expertise and unique experiences with the Arab art scene, Khazindar is regularly invited to speak at conferences and forums throughout the world and has been an art advisor and consultant to numerous museums, and cultural and artistic institutions.

In 2010, she was appointed co-curator of the 1st Saudi Pavilion in the 54th edition of the Venice Biennale and was chosen as a nominator for the twelfth cycle of the Aga Khan Award for Architecture (2011-2013). She also worked, in 2011-2013 as an art consultant for “King Abdulaziz International Airport “(KAIA) in Jeddah where she provided art consultancy services including the commissioning and procuring of artworks in different medias. She collaborated with the King Abdulaziz Center for World Culture (Ithra) in Dhahran, in 2011-2012, as a curator in view of selecting the artists and commissioning the artworks for the Public Art Integration Program.

She was appointed, in 2012 by the French Minister of Culture as a permanent member of the board of trustees of the Museum of the Civilizations of Europe and the Mediterranean (MUCEM). In 2012, she was named one of the six leading “Curators of Middle Eastern Art” and featured in 2012 and 2013 in the magazine Canvas as one of the Power 50 most influential cultural players in the Middle East. She was also voted Woman of the Year 2012 by the “New Arab Women Forum” in Beirut. In January 2013, she was appointed jury member entrusted to select the laureates of the 39th Bahrain Annual Fine Arts Exhibition. In 2014, she was featured in Who’s Who in France.

In 2014-2015, she was appointed cultural advisor for the President of the Saudi Commission for Tourism and Antiquities (SCTA). In 2017 she founded “Palette”, a culture and art collective which engineers cultural projects and publishes art publications. “Palette” was chosen by “Bienalsur” to select and work with five Saudi artists in view of their participation in the 2019 edition of the Biennial. In 2018, Mona Khazindar was appointed by Royal decree, as member of the “Saudi Cultural Authority”; she was nominated member as well of the “Ithra” advisory council.

Khazindar has written widely in Arab and European publications on Arab art, culture and history. She is currently authoring a book that will be released in February 2019 in English, French and Arabic. Titled Visions from Abroad, Historical and Contemporary Representations of Arabia, the book will be published by Skira (Milano) for the French and English editions, and by Kaph (Beirut) for the Arabic version.

She holds a postgraduate degree in Contemporary and Modern History from the Sorbonne and a bachelor’s degree in Comparative Literature from the American University in Paris.