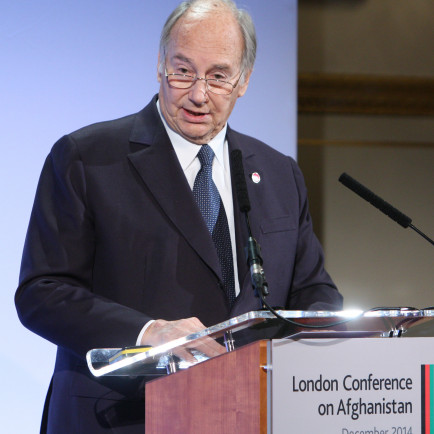 While the is less accessible to the public than the museum (during prayer times, the hall is reserved for followers of the faith), it was still designed with light and openness at its core. The front doors are set within a sweeping limestone wall, and the plan of the prayer hall is a circle.

For Correa, both are architectural metaphors of welcoming, all-embracing arms. Arriz Hassam, of Toronto’s Arriz+Co, and British firm Gotham Notting Hill collaborated on the interior finishes, which also express a sense of openness. The main lobby, meeting hall and offices are separated by transparent walls etched with a motif of Hassam’s own design, based on a fractal pattern inspired by the geometries of Correa’s prayer hall dome. The pattern is repeated on the stone floors, carpeting and screens; the composition of stars and circles alludes to both celestial divinity and earthly inclusivity.

The Ismaili Centre, Toronto, was designed to respond to the traditions of Islamic architecture in a contemporary way using modern materials. A distinguishing feature of the building is the multi-faceted glass roof of the prayer hall (Jamatkhana), that can accommodate 1,500 people, which recalls the corbelling in many of the traditional domes in the Muslim world. The glass dome, which represented a difficult technical challenge, rises to a height of 65 feet above the roof and is made of two layers of high-performance glass and fritted to deflect the heat of the sun.

A clear sliver of glass facing east toward Mecca runs down the translucent roof. The orientation of the building is determined by its urban context, which provided a grid with which to work. Set against the grid is the circular prayer hall. The prayer hall is spanned by a double layer of glass sitting on elegant structural steel trusses of various depths and dimensions. The glass rises in the shape of a cone and is pieced together to form a fractal skin. The Ismaili Centre also includes spaces for institutional, social, educational and cultural activities.