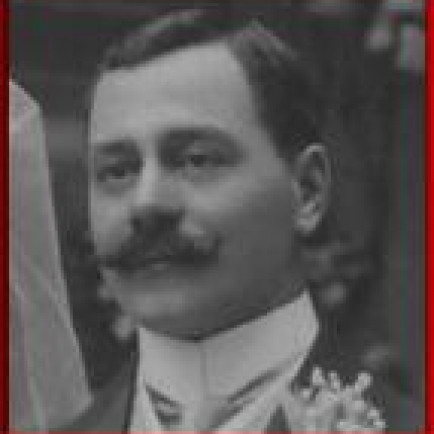 "Mr. Henry Alfred Neubronner. Distinguished alike in his profession as an architect and in social and sporting circles, Mr. H. A. Neubronner is one of the most popular men in Penang today. He is the only son of Alfred Dewind Neubronner and was born in Malacca in 1872 (1871). He was educated at Alexandra Park College, North London and by a private tutor in the metropolis and at Lowestoft, and before he qualified for an Assistant Surveyorship at H. M. Office of works, London, he passed the qualifying examination as a Professional Associate of the Surveyors Institution and later, the Associate Examination of the Royal Institute of Architects. After practicing for some time in London, Mr. Neubronner came out to Penang, where he was attached to the Siamese Consulate. Later, in conjunction with Mr. Alan Wilson, he established the firm of Wilson & Neubronner architects and civil engineers. Most of the principal public buildings and private mansions in the settlement have been designed and their construction superintended by his firm. He is a member of the Royal Society Club, St. Jamess, London, and of all local clubs. Since his boyhood he has been a keen cricketer. When only nine years old he played for Alexandra Park College, and very quickly got into the first eleven of the school. He also played football for that Institution and later for the Clapham Rovers and Civil Service (Association). He gained his Middlesex County badge in 1897, and played right-forward in the English team against France at Paris in 1898. Since 1899, he played for Pinang both at football and cricket, and has taken part in practically all the inter-settlement and inter-State matches, captaining on two occasions, teams representing Pinang. Mr. Neubronner is also an excellent tennis player, having been runner-up for the championship of Pinang on three occasions. In golf, gymnastics, billiards and swimming matches, he has figured as a prizewinner, and has also met with success as a runner at athletic sports. At one time he was senior non-commissioned officer in the Pinang Volunteer Corps, and is now on the Reserve. In 1902, 1904 and 1906 he won the rifle championship, besides numerous other trophies; attended the Hythe School of Musketry, and passed out with distinction; and in 1905 reached the second stage in the competition for the Kings Prize at Bisley. As further showing the scope of Mr. Neubronners tastes, it may be added that he is a member of the Pinang Hunt Club, the Choral and Orchestral Society, and the Dramatic Society. He possesses an exceptionally good high baritone voice. As a member of the Pinang "Impressionists" he gained first honours in water-colours for his pictures "Desolation," "A Malay Settlement," and "Sunset Glow." Mr. Neubronner is Vice-Consul for Siam, and resides in Perak Road."