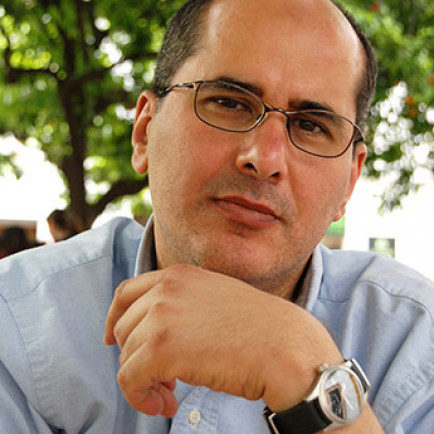 Dr Khaled Omar Azzam is the Director of The Prince’s School of Traditional Arts in London. He is an architect by training and maintains his practice through offices in Cairo and Jeddah. He has built houses, schools, mosques, offices, commercial buildings and royal residences. These projects apply the principles of traditional Islamic design and construction techniques, acquired from academic research and practice, with the aim of establishing a contemporary expression for the architecture of the Arab/ Islamic world. The integration of architecture, the arts and education is not only seen in his architectural profession but also in his academic career through the development of education projects, programmes and institutions.

In 1999, he became the Director of The Visual Islamic and Traditional Arts (VITA) Programme at The Prince’s Foundation in London. This role entailed the development of the postgraduate MA and PhD programmes and expanding the education programme through an extensive outreach programme which included: projects with schools and communities in the UK and abroad; developing relationships with cultural and educational institutions such as the National College of Arts in Lahore, The Arab Academy in Cairo and establishing the College of Traditional Islamic Arts at the Al Balqah University in Amman, Jordan.

In 2003, HRH The Prince of Wales established The Prince’s School of Traditional Arts and asked Dr Azzam to become its first Director. Through this initiative, Dr Azzam facilitated the enlargement of the VITA educational programme, promoting a comprehensive understanding of universal principles and values shared by diverse cultures and faith traditions. Dr. Azzam has also integrated the School’s education programme with the need for awakening the social, spiritual and economic lifeline of communities through a vibrant Outreach Education Programme that reaches marginalised communities from Rose Town, Jamaica and Kano, Nigeria to learning communities in cosmopolitan Abu Dhabi and Beijing, China. Drawing inspiration from the common cultural heritage of the great traditions of the world, he leads teams of the School’s alumni in facilitating practical workshops and implementing educational programmes which bring an awareness of the fundamental underlying universal order of nature and how it manifests itself in terms of cultural identity.

In 2009, Her Majesty the Queen awarded Dr Azzam the title of Lieutenant of the Victoria Order. In 2010, he was privileged to address His Holiness Pope Benedict VI on behalf of the Muslim community at a gathering of London’s Faith communities.

Dr Azzam continues to build, not only contemporary architectural projects, but also the basic structures for an integral education programme through a multi-level and multi-cultural approach. Although, the core education programme of The School is maintained in London, its studios and workshops have spread across the globe. Dr Azzam has been involved in the development of the education curriculum of these centers which include primary and secondary schools, graduate and vocational skills training programmes and educational institutions all over the world.

Director of The Prince’s School of Traditional Arts, London.

Facilitates the formation of a new Charity, founded by HRH The Prince of Wales and became its first Director.

Expands the brief of the VITA Programme to include post graduate educational programmes in the traditional arts of other civilisations as well as community and public education programmes; as well as a research and publications programme.

Director of The Visual Islamic and Traditional Arts Programme at The Prince’s Foundation, London.

Oversees the postgraduate MA and PhD programmes in Islamic art and architecture.

Initiates outreach and community education programmes for schools and Muslim communities in Britain.

Establishes joint educational programmes between The Prince’s Foundation in London and other international institutions including the University of Damascus, The National College of Arts in Lahore, The Arab Academy in Cairo and The University of Al Balqah in Jordan.

Coordinates and organizes educational field trips to Damascus, Granada, Morocco and France and other cultural sites.

Curates two exhibitions per year related to the work of The Visual Islamic and Traditional Arts Programme.

Develops a two year diploma course and a full time BA course in Islamic art at the Al Balqa University in Amman, Jordan.

Establishes guidelines for the rehabilitation and development of the historic madinah of Sidon in Lebanon.

Consultant to The Government of Uzbekistan (on behalf of H.R.H. The Prince of Wales)

Assists in the development of the mosque complex of Imam Bukhari in Samarkand.

Coordinates the introduction and implementation of courses in Islamic art and architecture for the The Institute of Technology Mara and The University of Malaysia.

Chairs a series of seminars with the aim of holding a conference in Malaysia on mosque architecture.

Cultural Consultant to HRH The Prince of Wales

Accompanies H.R.H. The Prince of Wales to Riyadh to the Janaderiyah Cultural Festival.

Organises an exhibition and a lecture series on Islamic art and architecture in conjunction with the Festival.

Senior Tutor, The Prince of Wales’s Institute of Architecture, London

Senior Tutor at The Visual Islamic and Traditional Arts Department.

Senior Research Fellow in charge of a programme of research in Islamic architecture.

Establishes a private practice in architecture with offices in London, Cairo and Jeddah.

Implements projects ranging from private residences and commercial developments to official buildings and educational institutions in Cairo, Jordan and the Gulf region including

The Headquarters of The Islamic Investment Company for the Gulf, Jeddah, 1996;

The Islamic Prayer Room at The Millenium Dome, 2000, London;

Project Manager for the London Office and Project Architect

Abdel Wahed El Wakil is the leading architect in the field of traditional Islamic architecture. In the period from 1985 to 1991, the practice undertook the design and construction of 14 major mosque projects in Saudi Arabia; amongst which were the historic mosques of Quba and Qiblatein in Al Madinah al Munawarah. The work entailed traditional design principles and construction techniques as well as the detailing of the major decorative crafts. Other projects executed during that period of work were a series of private residences, commercial buildings and government offices.

The Royal College of Art, London, 1993 - PhD. - PhD. Thesis “The Islamic City : A Pattern of Neighbourhood Quarters: The Case Study of the Madinah at Rabat”

Lectures and Papers Presented at Conferences

“The Art of Islam”, 1990, The School of Theology, Cambridge University.

“The Neighbourhood Quarters in Islamic Cities”, 1991, BRIMES Conference at the School of Oriental and African Studies, The University of London.

“Organic growth and Urban Planning in the Islamic City”, 1993, The Centre for Urban Reconstruction, The University of York.

“A Contemporary Understanding of the Universal Principles of Islamic Art”, 1996, Assilah Festival, Morocco.

“The Alhambra”, 1996, The Prince of Wales’s Institute of Architecture, London.

“The Sacred Origin of the Arts of Islam”, 1997, Congress on Islamic Art and Thought, Gibraltar, Spain.

“The Traditional Madinah”, 1998, The Prince of Wales’s Institute of Architecture, London.

“The spirit of Art in Islam”, 1999, The Oxford Centre for Islamic Studies.

“Organic Architecture - An Appreciation Through the Traditional Arts of Islam”, 2000, The Prince’s Foundation, London.

“The Universal Principles of Islamic Art”, 2002, The Oxford Centre for Islamic Studies.

“Urban Form and Structure in the Islamic City”, 2003, The Islamic Studies Centre, The University of Wales.

“The Doors of The Kingdom” in The Decorative Arts in Islamic Architecture, Apperture, New York, 1998.

“The Medina of Sidon - Development of the Traditional Urban Form” in The Lebanon Project, Published by The Prince of Wales’s Institute of Architecture, London. 1998.

“The Geometry of the Arch in Islamic Architecture”, The Prince of Wales’s Institute of Architecture, London, 1997.

“The Meaning of Art in Islam”, Islamic Educational Quarterly, 1990.

First prize award for the submission to the CINTUS “Year of Shelter” housing solutions competition (1987); organised by The Union of International Architects and The United Nations.

Chairman of the Board of Trustees, HAMD (Humanitarian Aid and Medical Development)
HAMD is a charity based in London involved in providing medical aid and development programmes to war stricken zones. Its main areas of activity have been in Bosnia, Lebanon, Chechnya and Kosovo.

Chairman of the Board of Trustees, The Cambridge Muslim Welfare Society
The CMWS oversees the running of the Cambridge Mosque and the activities and welfare of the Muslims of the city of Cambridge.

Trustee, The Islamic Texts Society
The Islamic texts society is a charitable organisation with the objective of publishing the traditional texts of Islamic doctrine and philosophy in English.