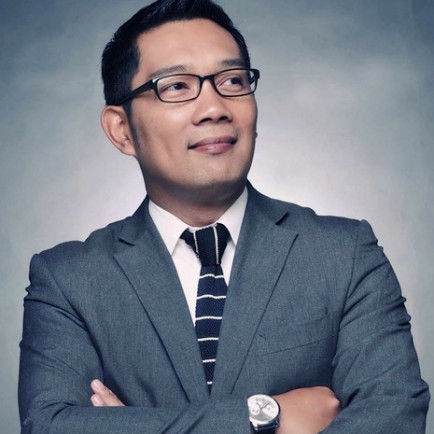 Architect, Commissioner
Urbane Indonesia
Ridwan Kamil was born in Bandung on 4 October 1971, Emil nickname, he is the second child of five brothers. Emil or Ridwan Kamil actually likes to imagine since the time of small. He likes to read the comics and view photos from various cities outside the country. Since the small Ridwan Kamil has the spirit of entrepreneurship. He went to school at SDN Banjarsari III Bandung years 197 until 1984, when the elementary school he has sell ice mambo appearance itself. During the school, ridwan Kamil known as the figure that is active and intelligent. Besides active in OSIS, Paskibra and football club, Emil always in the ranked five great in its class.
After the completed primary school then he continued his studies in the SMP 2 Bandung then at SMA Negeri 3 Bandung in 1987 until 1990. After he graduated from high school and then continue their education at the Institute of Technology Bandung with majoring in Architecture Engineering from 1990 until 1995. Ridwan kamil is also active in groups of students and the unit art activities. The spirit of entrepreneurship  on campus again, to search for additional funding for the courses he make cat illustration of water or a model for lecturers.
Graduated from ITB, he chose to work in the United States. But last only four months work he stopped because of the impact of the monetary crisis Indonesia to make the client does not pay his work. He does not directly returned to Indonesia, he survive in America before finally received a scholarship at the University of California at Berkeley. While take S2 in the Universitas Negeri Ridwan Kamil worked part time in the Department of city planning Berkeley. To survive in America, he eat once a day with cheap menu costing 99 cents. The Struggle Ridwan Kamil to survive in America continue to be tested when his wife, Attalia Praratya will give birth to their first children. The Father who now have two children this does not have the money for the cost of birth of his wife, until finally he must confess poor at the local city government to get free medical treatment. Finally, he accompanied his wife gave birth in a special hospital for the poor, exactly in the hall of the hospital. For him the experience fall wake up his life forms a separate values will be harsh struggle for life.
In 2002 Ridwan Kamil returned to the land of his birth in Indonesia and two years later established Urbane, the firm that moves in the field of planning consultant services, architecture and design. Now Ridwan Kamil actively serves as the Principal PT Urbane Indonesia, Lecturer at the Department of architecture of the Bandung Institute of Technology and Senior Urban Design Consultant SOM, EDAW (Hong Kong & San Francisco), and SAA (Singapore).
Urbane is the firm that built by Ridwan Kamil in 2004 with his friends such as Achmad D. Tardiyana, Reza Nurtjahja and Irvan W. Darwis. International reputation they have already got up with working on projects outside of Indonesia as Syria Al-Noor Ecopolis in Syria and Suzhou Financial District in China. Own Urbane team consists of young professionals and creative thinking idealistic to search for and create a solution to the problem of environmental design and urban areas. Urbane also has a community based project in Urbane Community Project where the vision and mission is to help people in an urban community to provide donations and skills in improving the surrounding areas.
Urbane has many granted the awards from the international media such as BCI Asia Awards three years in a row in the year 2008, 2009 and 2010 and also BCI Green Award in 2009 over the project (Bottle house design from old bottles). Urbane also often follow the competition in the field of desian national level architecture as the winner of the competition the design of the Museum of the Tsunami in Aceh Darrussalam Nangro 2007, Champion 1 campus design competition 1 Tarumanegara University in 2007, The Winner of the competition the Design Faculty of Cultural Studies at the University of Indonesia in 2009, champion 1 design competition in the City of Nagari Sanggar Parahyangan New in Bandung Regency West and the winner of the competition Center of Art and Design Art School at the University of Indonesia in 2009.